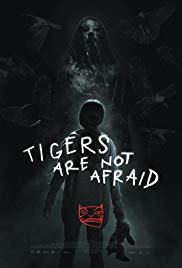 I went to a Mexican film festival in Salinas this week. I saw a bunch of pretty good flicks. So far I saw 5 movies for $25. The one I saw tonight, Tigers Are Not Afraid was the first horror one of the bunch, and I must say it was muy espanto (very scary)! The plot involves a little girl, whose mother has been killed by a Mexican drug lord. She has a big imagination and she teams up with a bunch of other kids whose families have also been killed. Yes, this is a big downer! It is pretty realistic , though full of horror and fantasy imagery. It has good special effects and a pretty big budget. Some of her hallucinations involved the tigers. She sees herself as being a kin to a tiger, She thinks she sees a tiger which has escaped from the zoo. Seeing the tiger gives her strength. Basically these kids try to take on the Mexican drug lords. This doesn’t turn out well for them (as you may imagine), It is a weird mixture of stark realism and fantasy imagery, even whimsical imagery at times. The images are somewhat visionary. If the female director would use this style to direct something less depressing, then she would honestly be a big deal.