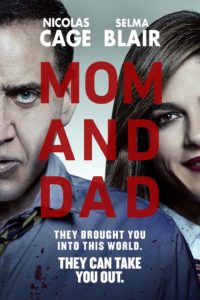 I saw this cool horror comedy which had a limited release earlier this year. There is a scene in where Cage destroys a pool table while singing ‘The Hokey Pokey Song’, that I really enjoyed. This oddball little film was able to use its indie status to be more experimental.  It is about a strange TV and cell phone signal that causes parents to turn against their children.  Everyone who is a parent is impacted when they are with their children, and the film shows in some detail the impact this would have on society.  Cage’s character makes Jack Nicholson’s character in the Shining look a bit wimpy. Many people often incorrectly assume Cage will just take any B movie he is offered, since he owes so much money on those Egyptian pyramids he purchased in Michael Jackson bankruptcy styled fashion. The truth is that Cage is given opportunities to play quirky characters who are not corporate inspired, characters close to his original Raising Arizona success. Other examples of good low-budget Cage include Paul Schrader’s “Dog Eat Dog” with Willem Dafoe (available on Netflix) and the new cult horror hit “Mandy.”

The director, Brian Taylor, did the Jason Statham film Crank, and he knows how to keep the plot moving, and the action flowing.   He directs the film in a “grind house” style that is appropriate. Selma Blair, as Mom, proves that she is an underused actress with a good performance that shows a lot of range.  GROIN Hall of Famer Lance Henriksen makes a surprise cameo appearance and steals some scenes in a funny role.  The film ultimately doesn’t lead anywhere that surprising or revelatory, but it works well enough to register as the best horror satire since “Get Out.” Without using much gore, the director generates scenes that are both nightmarish and rather hilarious.  If you’re looking for good cult horror, don’t miss “Mom and Dad” on DVD, Blu-ray, and Amazon Instant Video.