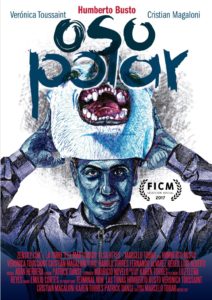 At the Hola a Mexico film festival in Salinas, California, I came across an unexpected gem called “Oso Polar” (Polar bear).  This film was shot on cell phones and is about a man who was picked on by his class during high school who nevertheless offers to chauffer several of his classmates to their high school reunion,  The reunited students think good times are about to ensue, but the often-slighted driver has other ideas.  The film starts out rather mundanely introducing the characters.  However, it soon turns into a low-budget cross between  “Donnie Darko” and “The Gift.”  The director builds up intrigue here and sets up apocalyptic events,  Because of the budget, the payoff is muted.  However, “Oso Polar” remains a very effective, well-acted thriller that could definitely give you nightmares!  This little film is definitely worth seeking out.