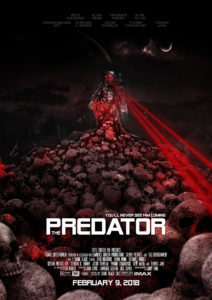 I went to see Predators the other day. It happens to be directed by one of the actors from the first Predator film (the guy with the glasses in the platoon) and the trailer was awesome, as in totally full of action plus funny. So I went into this film having very high expectations. This film does have a lot of action, and it is also pretty funny. There also happens to be a very high body count involved. However, it is somewhat fleeting and unmemorable, with the exception of the set-up at the end, which I will elaborate on further.

The plot is basically: the Predator is being held at a government facility and they think they have it subdued. Meanwhile, an autistic boy has unwittingly found a Predator suit and accidentally summons a bunch of Predators to Earth. Unfortunately, it wakes up and kills everyone except for a few stragglers led by Olivia Nunn, who escapes by getting naked. Basically, The Predators are poised to conquer humanity. and only the Loonies (led by Nunn, Boyd Holbrook and Thomas Jane) can stop them.

Here is where the film falls short: too much humor. It’s hard to get too worked up about the threat of the Predator when there’s a one=liner every minute. Some of the humor is a little too on-the nose, such as when a character describes the Predators as “alien Whoopi Goldbergs.” Also, the films lacks a setting as interesting as a those of the first three.

In these couple of regards though it is a pretty decent and entertaining action & sci-fi extravaganza: the humor, when it lands, is effective. For example, there is a great gag involving a misunderstanding involving “eating pussy.” Also, it is revealed that the Predators want to use the best of humanity to mate with the Predators, which means that the autistic boy is in danger of having to mate with the Predators. There is a TON of action and unlike the previous films, there is a huge budget ($90 million). The set-up for a sequel at the end is surprising and effective.

Would I recommend this movie? Yes, but don’t expect a seriously memorable or mind-blowing experience. Personally, I like the first film, and then I like Predator 2, as well as Predators (with Adrian Brody). Let’s face it, it takes great actors to make a great movie. One more thing I would like to mention is that Alien v Predator 2 (yes, the one where there are teeny characters and the Alien ends up fighting in the HS swimming pool) is an abomination, and each and every last copy should be tracked down and summarily burned into minces. This one is not as good as the first three “Predator” films but is much better than the “AvP” films as well as the latest “Jurassic World” disappointment. If you’re a fan of the Predator films, don’t miss “The Predator.” It’s the year’s best monster film!