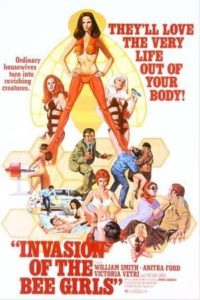 Looking for sexy B-movie fun from the 1970’s? Look no further than “Invasion of the Bee Girls,” a strange, surprising, daft, and rather wonderful soctcore sci-fi/horror/comedy from 1973. The film stars William Smith, the great tough guy actor from films like “Hells Angels on Wheels” and David Cronenberg’s “Fast Company,” as a police detective in a small American town. His job is to answer a rather complicated question: Why is there an epidemic of men inexplicably dropping dead? Well, it turns out that they’re all dying. How could that be? Smith is not sure, but there is a really hilarious scene where he tries to convince the men of the town to practice abstinence, That scene alone would be enough to make the film worth a look, but this movie is just getting warmed up. It turns out

This film has some good acting, an original story, hot babes taking their clothes off, interesting choices of music, and great dialogue courtesy of Nicholas Meyer (also responsible for “Star Trek 2,” “Star Trek 4,” and “Star Trek 6”). This film has a lot of interesting things to say about feminism and the battle of the sexes. For example, it shows how men can’t resist a hot woman even if they think they might be deadly. We also see how women would prefer to be rid of men and so use them only to procreate. Ultimately, the film is like a sci-fi Russ Meyer movie, and a pretty damned good one too! If you like outrageous films, don’t miss “Invasion of the Bee Girls,” available on DVD and Blu-ray. It’s satire with a real sting!