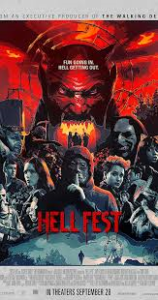 Tired of big Hollywood stinkers like “Assassin’s Creed” and “Beauty and the Beast”? Ready for some serious B-movie fun? Prepare yourself for two movies out on DVD that are way more entertaining than that “Boss Baby” crap.

First up is the 2009 remake of “Night of the Demons,” which stars Shannon Elizabeth (from “American Pie”), Monica Keena (from “Freddy Vs. Jason”) and Edward Furlong (no introduction needed). This film follows the basic plot and features many of the same exploitative elements (read: boobs) that made the 1988 movie with Linnea Quigley (who cameos here) so much fun. In short, a bunch of dorky college kids plus a drug dealer (Furlong) get together at an old New Orleans manor to celebrate Halloween. Soon they discover that the house is a conduit for demons who want to possess seven of them and take over the world. Can Edward Furlong and company stop taking heroin and playing spin the bottle long enough to save the world?

This is a $10 million film that went straight to video, probably because the original film is not nearly as famous as classics like “The Omen” and “Halloween.” The story is acceptable and the special effects, makeup effects, and other technical attributes are really good. The only actor to make an impression is Furlong, who plays his part convincingly and with pathos. He deserves a chance at a comeback. Overall, the film is about as good as the original, which means it’s undistinguished but tons of fun. Readers are advised to rent it on Netflix.

Second up is 1988’s “Nightmare at Noon,”(aka “Death Street U.S.A.”) a truly whacko ripoff of “The Crazies” about a mute albino (played by Brion James) who starts a government experiment by contaminating the water of a small town, turning those unfortunate people who drink it into crazed killers. Meanwhile, a scummy lawyer (played by Wings Hauser) and his wife pick up a hitchhiker (Bo Hopkins) on their way into this town while the sheriff (played by George Kennedy) and his daughter try to figure out what’s going on.

Basically this starts as a zombie film, turns into sort of a western (“High Noon” is playing at the town drive-in.), and then it turns into a high-concept “Blue Thunder” kind of thing. It’s completely crazy and absolutely never dull. George Kennedy is great, the technical credits are good and the music by Stanley Myers and Hans Zimmer are very effective. Bo Hopkins and Wings Hauser are quite the team, having also starred together in “Mutant,” In short, this is a crazy killer B film that is worth seeking out.

I should note, in closing, that I had never heard of either of these two films before picking them up. As a result, they were much better than expected. Check out “Night of the Demons” (2009) and “Nightmare at Noon” if you want good old-fashioned B-movie fun! –CoolAC

About two years ago a film buff friend of mine gave me “Deadly Prey” on Blu ray for my birthday. I had never heard of it but I watched it immediately and was very impressed. “Deadly Prey” is the best “Rambo” rip-off ever made, and also probably the best Bad Action film of all time.

The plot is about a super-ripped Vietnam Vet (played by Ted Prior, director David A. Prior’s brother) who is kidnapped while taking out the garbage. He ends up at a remote facility where he and other “contestants” are being hunted down and killed and must kill in response or die! One of the people in charge of this “game” is his old drill sergeant. And eventually the Vet’s family finds him.

That’s all the plot this movie has. Basically it is scene after scene of people getting killed in the goofiest ways possible, including grenades, knives, leeches, hand-to-hand combat by the always shirtless Ted Prior. So many people die (basically everyone except the hero!) that the film becomes a kind of Zen experience that you just have to kind of roll with. Just when you think it can’t get any crazier, the movie concludes with a scalping. You haven’t lived until you’ve seen a scalping on-screen.

Basically, “Deadly Prey” is a much more fun version of “Missing in Action 2” and the later “Hard Target.” The somewhat poor picture and sound quality on the Blu-ray enhance the experience. This film is cheap but hilarious and action packed! The director also made a film called “Kill Zone” which is almost the same thing and also entertaining. Some of the many works of the director include “Killer Workout” and the long-awaited 2013 sequel “Deadliest Prey,” also starring Ted Prior. Both of these are available on Blu-ray. Sadly, David A. Prior died in 2015. Because his movies are so much fun, I am giving him a Groin.com lifetime achievement award, in honor of his ability to make Great Trash. If you like Bad Action, check out these films!